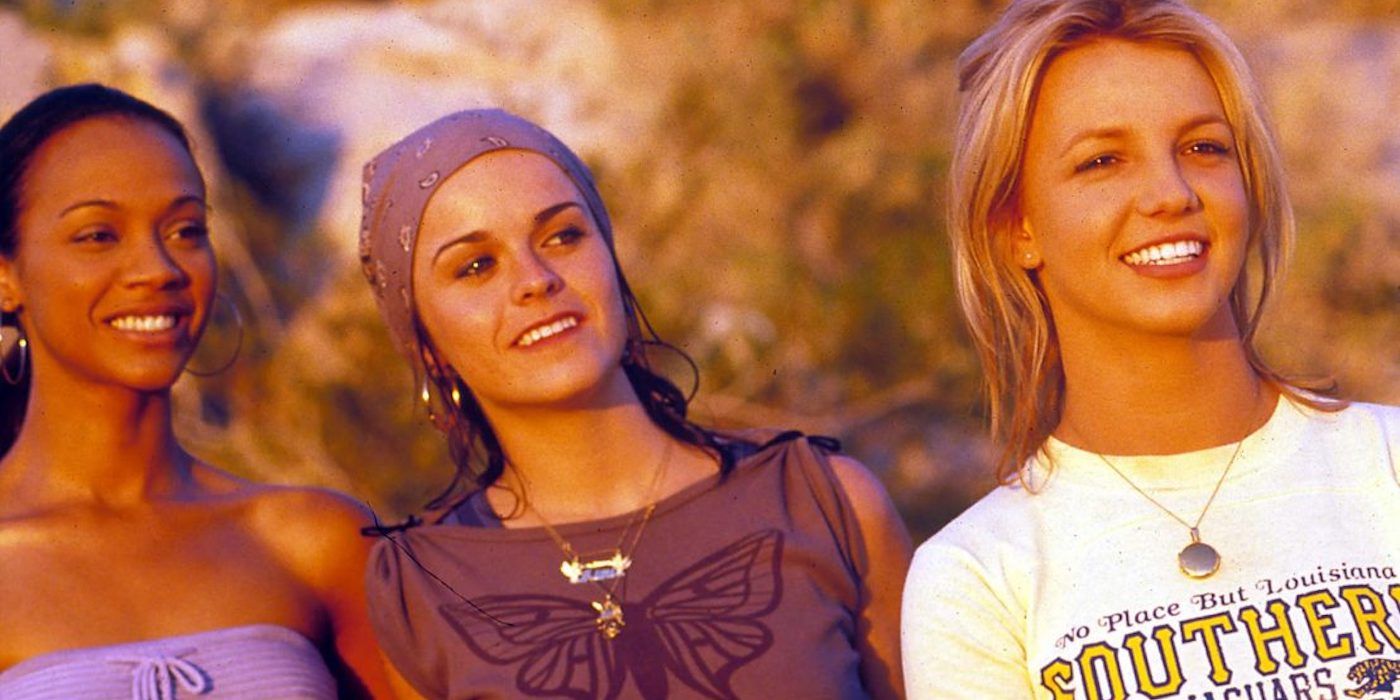 Musicians have been crossing over into film acting for decades. Crooners like Bing Crosby and Frank Sinatra acted, Elvis’s massive success was carried over into film, rock bands explored their art through celluloid in the ‘60s and ‘70s; by the ‘80s Michael Jackson’s aimless variety show Moonwalker embodied a transition. As time went by, the projects musicians acted in went from fictions unrelated to their discographies - albeit some were musicals - to custom-built vanity projects whose sole purpose was to further the empires of their stars, often at the expense of actual entertainment. Pop star movies of the 1990s exemplified this. The Spice Girls played themselves, stomping around a psychedelic bus and singing Gary Glitter songs with backup dancers in assless chaps; Mariah Carey’s ego received an always welcome inflation with the widely-panned Glitter. This trend would carry on into the 2000s a little, with S Club 7’s weird clone movie, before the cinema concert experience took over.

In Crossroads, Lucy (Britney Spears), Mimi (Taryn Manning) and Kit (Zoe Saldana) are childhood friends who bury a time capsule box and promise to return years later on prom night to dig it up. Well, the day arrives, and they have all taken very different paths in life, barely even acknowledging each other in the school halls. But for lack of better things to do, they do reunite, and have a laugh at how naive they once were. Mimi reveals she is planning a road trip to California to audition for a recording contract, and invites the girls along. They both accept, as they have their own questionable plans: Lucy will arrive uninvited at the house of the birth mother she never met, and Kit will arrive uninvited at the apartment of her supposedly loyal fiancé in LA. What could possibly go wrong?

They go through the motions expected of a road/buddy movie: first it’s fun, then they realize why they’re no longer friends, then they start to rebuild bridges and ultimately end up as close friends again. Along the way, they do all sorts of crazy things like earn money singing karaoke, bunk in crummy motels and get their asses bitten by bugs. But it is the release that they are all in desperate need of. In their own ways, the girls are each absorbed in overly-mature lives when they should be enjoying adolescence. Kit is tied down in a long-distance engagement, Mimi is impoverished and pregnant, and Lucy’s entire life has been focused on the long-term goal of a career in medicine. Because of their situations, they each overlook the fulfillment they could be experiencing, so it makes sense that a spontaneous road trip with friends they have long since stopped hanging out with would become the outlet they all really need.

Dan Aykroyd plays Lucy’s long-suffering dad Pete, a hard-working mechanic whose only child has been his main focus in life. He has spent years making connections and giving mates’ rates in order to facilitate his daughter’s entrance into the competitive world of medicine. So solid is his work ethic and desire for Lucy to have more in life than he has, that he doesn’t even recognize the importance of what she has missed out on, things like friends and football games. He is firm but loving, almost a throwback to Aykroyd’s much better role as Harry Sultenfuss in the My Girl movies. In a world that seems devoid of parental figures, he offers a stability that young people desperately need; he even steps in to give fatherly support to the other girls when their own parents aren’t there to do it. He shows how instrumental a proper support system can be in raising functional and emotionally healthy kids.

Years before Taryn Manning would become known as Pennsatucky, the reformed fanatic from the wrong side of the tracks on Orange Is The New Black, she cut her teeth on Crossroads. Granted, it seems that a certain amount of her real personality is thrown into every performance she gives - one might wonder to what extent she is really acting - but this is perhaps what makes Mimi such a raw and relatable character. She is depressed and hopeless, settled in the mediocrity of her life, a startlingly real figure. Where the ‘bad’ kid characters often swagger around with assurance, Mimi is clearly downtrodden, and offers a more realistic look at what sorts of adults can emerge from underprivileged upbringings.

Zoe Saldana, again some years before she really exploded on the scene, shows a remarkable propensity for comedy as Kit. She is the spoiled rich girl who is simply wrapping up the formalities of having to attend high school before becoming a kept woman living the high life in LA. She has no time for anything or anyone in her little podunk town, and is fixated on the fantasy existence she has concocted in her head, one that cold hard experience brings crashing down on her. Saldana pulls off the snippy Real Housewives style sass with brilliance and a keen sense of timing, creating a very believable character that LA is already overrun with. Her emotional range brings meaning to the humbling conclusion of her story, and of all the characters in the movie, she is the one who goes through a real arc, and emerges as a better person for it.

Of course, nobody expected Shakespeare when it came to Britney’s acting; her usual job was to lip sync to catchy songs and look pretty in low-rise jeans. However, the passion Britney felt for this project, and the opportunity it presented to prove her capabilities, are evident in her performance. As could only come naturally to her at that point, there is an awful lot of looking pretty in low-rise jeans, but when she’s not fluttering her eyelashes and breathily whispering to people, she actually gets some material to sink her teeth into. To the surprise of nobody but herself, the fantasy of turning up on her mother’s doorstep and being welcomed with open arms goes up in flames and Lucy retreats, defeated, to the motel room the gang are staying at. She promptly bursts into tears, her mother having basically told her she was a mistake. This is the scene that Britney grabs with both hands and makes her own. Lucy's heartbreak is palpable, and her vulnerability in the scene proves instrumental to her forming stronger bonds with the other characters.

Crossroads was a project that worked in everybody’s favor - well, short of its target audience’s. Britney had expressed interest in making a movie and her team were naturally thrilled at the idea, leading to a collaboration with Grey’s Anatomy showrunner Shonda Rhimes and music video director Tamra Davis. Spears turned down many film offers to do something she could really put her heart into, and now that she was beginning to shed her good Christian girl image, a coming-of-age movie could parallel the artistic and emotional maturity she was going through, and essentially validate the transition to her consumers. This pivot is underpinned by the movie’s use of Britney’s music, notably 'I’m Not A Girl, Not Yet A Woman,' and 'Overprotected,' two very on-the-nose songs about having to make mistakes in order to learn, and generally embracing the messiness of adolescence as a character-building exercise.

At this stage in her career, Britney was largely considered a kids’ brand, hence the outrage when she started shaking off her Southern Belle persona. Her target audience was around the ages of eight to twelve; by their mid-teens, many kids considered her music passé and not edgy enough, as it hadn’t yet hit the Toxic era of sex appeal. This is why the general maturity of Crossroads is so striking: if parents thought that Britney’s skimpy outfits were a bad example, just wait til they saw her drinking and having sex outside of wedlock on the big screen! The movie released within weeks of the announcement that Britney and Justin Timberlake were no longer a couple, further shedding her family-friendly double-denim image and striking out on her own. It certainly ruffled the feathers of parents and Christian outrage groups, but more than just one pop star rebelling against her typecast, it represented the pop star movie rebelling against its usually superficial constraints.

But just because the movie dares to explore some of life’s darker complexities, doesn’t mean it leans into the consequences of those complexities. If anything, it seems to shy away from them. Mimi’s future as a poor teenage mother with only a high school education no longer matters, because she loses the baby in a sad accident; Lucy’s little excursion jeopardizes the connections she has spent years making to facilitate a medical career, but it’s OK because she’s a pop star now, a vocation famed for its longevity! The girls go off with a man who is recently out of jail, but it’s OK, because he was basically innocent all along. The ends of the girls’ stories take on the unrealistically cheery facade required of a PG-13 rating. None of them, with perhaps the exception of Kit, has really had the chance to learn from their experiences, because a solution has fallen into their lap.

How will Mimi deal with the trauma of being raped and unexpectedly losing the baby she hoped might give her some direction in life? How realistic is Lucy’s decision to abandon her years of work to be a singer? Winning some talent show - as many of Simon Cowell’s victims will tell you - does not equal a stable, lifelong profession. Should she not look at ways to balance her career plan and her passion? Is it not shortsighted and somewhat selfish of her to put her long-suffering father through such an ordeal?

Although it fails to really explore consequences, and seems a little restrained by its certification and target market, Crossroads dared to be something different. It wasn’t looking to be a vanity project or marketing tool for an album - although it did serve these purposes to an extent. It wanted to tell a meaningful story that didn’t exist in the perfect pop star world that Britney’s image perpetuated. It may not be Stand By Me or a John Hughes flick, but it has more brains and more heart than star vehicle movies ever care to possess, and proved to be a very clever move for Britney Spears at a pivotal point in her career.